Raising the white flag of surrender in Arizona 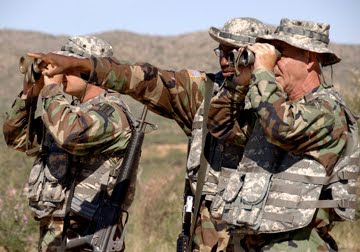 From FoxNews -- About 3,500 acres of southern Arizona along the Mexican border is closed to U.S. citizens due to increased violence in the region.

The closed off area stretches 80 miles along the border and includes part of the Buenos Aires National Wildlife Refuge. It was closed in October 2006 "due to human safety concerns," the U.S. Fish and Wildlife Service said Wednesday in response to news reports on the closure.

Pinal County Sheriff Paul Babeu told Fox News that violence against law enforcement officers and U.S. citizens has increased in the past four months, further underscoring the need to keep the 80 miles of border land off-limits to Americans.

Asked: Since when does the US surrender land in any fight with hostile invaders? Why isn't the US military down there taking live-fire target practice against anything that moves?

Answered: because Barack Obama and the progressive left want 12-20 million new dependent, democrat voters to secure a permanent majority for themselves. Plus, socialists like Obama detest the United States and everything it stands for, which makes it all the more preposterous that we allowed the dastardly media to install him into the office of President in the first place.

We are afraid to fight so we just give up and let them have sovereign US territory......UN-FREAKING-BELIEVABLE!!!
Posted by Ed at 9:50 AM

Agreed, this is messed up, the statement should be "80 miles of border land off-limits to illegal aliens".