Obviously, God wants The Donald to be Prez.

If you are a Christian and you believe that seeing the virgin Mary in your french toast is divine pareidolia and you think Christians shouldn't be Trump supporters because he doesn't invoke God all the time and isn't evangelical like Cruz, then you must be conflicted by this clear image of The Donald in what appears to be pancake batter, or plastic resin of some kind.

Why, it's an election-year miracle and clearly a sign from God. ;-) 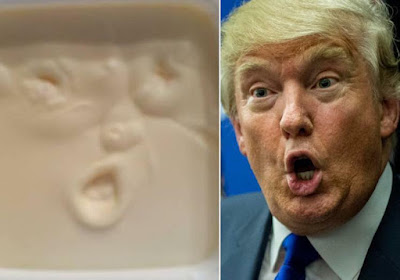 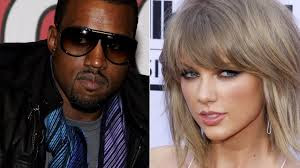 Heh heh, Kanye West tweeted today that Taylor Swift wasn't "cool".
Let's see, Kanye West owes some people $58 million, nobody likes his music or clothes, and he's married to a rich skank who won't lend him any money, while Taylor Swift is worth $200 million and is ranked as the #1 performer in the whole world.
Hey Kanye, poor, jealous, and desperate is not a good look.....heh heh heh.
Posted by Ed at 2:12 PM 1 comment:

Ok so these are my thoughts on Apple-vs-FBI:

1: under no circumstances should Tim Cook allow his staff to be conscripted into working for the feds, by being forced to create software that can break into iPhones, especially if the feds will be watching, and especially if they want the software afterwards. The government cannot force anybody to work for them, no matter how many "ticking time bombs" they pretend are in there, period!

2: having said everything in #1, Apple should take the phone into a locked room across the hall from the feds, gain access to the 18 minutes of deleted documents, call history, and assorted information, put it all on a flash drive and give the flash drive only, to the feds. Then Apple can destroy the phone.


Nobody gets compromised and the feds get the information they want. Unless the feds want the phone back to reverse engineer the hack or won't hand it over to Apple for private access, then I don't see why this is such a problem.

If Tim Cook sticks to his guns, and he probably will, the Apple appeal of the ruling should make it to the supreme court maybe next year. Should be quite interesting.
Posted by Ed at 8:57 AM 5 comments:

A-10 gets a stay of execution 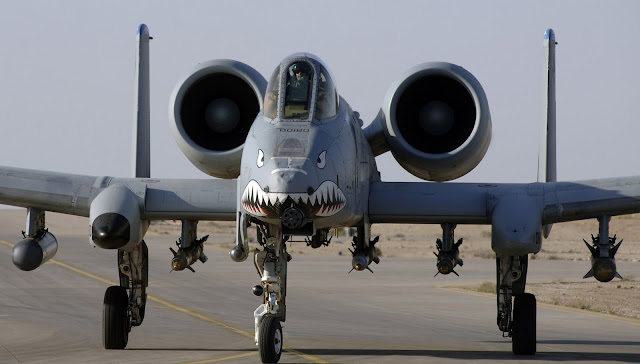 Even though I spent my national guard career loading weapons on F-15's, my favorite Air Force fighting machine is the A-10 Warthog. It got a stay of execution today as the Pentagon can't find a better platform for killing terrorists in the desert, and the ISIS rabble make nice targets of that particular description.

It was supposed to be retired this year or next and replaced by the new F-35, but the existing A-10's cost about $11 million per copy while the F-35 is like $98 million each and maintenance costs for the F-35 are ridiculous.

So B'ham is about to raise the minimum wage to $8.50 this week, despite the state legislature trying to fast-track a bill to prevent it.
The plan is to raise it again to $10.10 by Jan 1.
I'm guessing the morons on the city council are unaware of the increase in unemployment that always goes with a minimum wage hike.
I've said it before, if you're making minimum wage for longer than 6 months and haven't earned a raise or you're trying to support a family on a job designed for teenagers, then you've made many horrible life decisions already.
Perhaps you could benefit from the leadership of a life coach more than you would forcing employers to pay you far more than washing lettuce is worth to them.
Posted by Ed at 7:21 AM 2 comments: 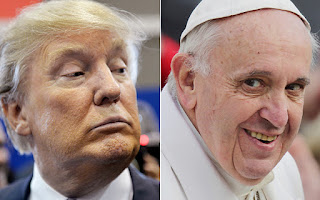 Heh heh, the Pope gets his holy jock handed to him by Trump.
Trump didn't appreciate being chastised by the Blessed Father of Silly Hats for his wall idea for Mexico.
Trump basically said, Hey pot meet kettle, that's a pretty big wall you have to keep undesirables out of the Vatican, and when ISIS comes knocking you'll be glad I'm a president who'll save you.
Heh heh heh, owned!

If you are Catholic and are offended by this post, get over yourself.

Karma comes fast when you're an ISIS terrorist 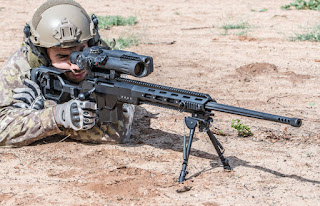 An ironic beheading, and therefor hilarious beheading, of an ISIS leader: Apparently a hotshot British sniper used this new DAN .338 bolt action sniper rifle from IWI-- (hat tip to regular reader Bill for pointing out that IWI is an Israeli manufacturer, thus making this beheading that much more ironic) --at a range of 1000 meters, to behead an ISIS leader who was teaching 20 ISIS recruits how to behead somebody. Heh heh heh.

According to a spotter, the body stood for a second or two then fell, headless. Then all the recruits ran away at high speed screaming, effectively eliminating 21 terrorists with one bullet.

Apparently this kill was done using the Lapua Magnum .338 that tumbles toward the target and just obliterates it. It was the same round that Brit sniper Craig Harrison used to set the combat sniper distance record at 2,475 meters back in 2009.

Immigration reform must be reasonable, not outrageous

So this is the essence of Rubio's plan to deal with the 12-20 illegal aliens already living, going to school, and working here. I think it sounds reasonable given that there's no way this country will ever round up that many people, then bus and dump them into the Rio Grande to wade home.

[First, those here illegally must come forward and be registered. If they have committed serious crimes or have not been here long enough, they will have to leave. With the new E-Verify system in place, they are going to find it difficult to find a job in any case.

Second, those who qualify would be allowed to apply for a temporary nonimmigrant visa. To obtain it they will have to pay an application fee and a fine, undergo a background check and learn English. Once they receive this work permit, they would be allowed to work legally and travel. To keep it, they will have to pay taxes. They would not qualify for government programs like Obamacare, welfare or food stamps. And if they commit a crime while in this status, they would lose their permit.

Third and finally, those who qualify for a nonimmigrant visa will have to remain in this status for at least a decade. After that, they would be allowed to apply for permanent residency if they so choose. Many who qualify for this status will choose to remain in it indefinitely. But those who choose to seek permanent residency would have to do it the way anyone else would, not through any special pathway.]

Additionally, I don't think they are coming here purely for the jobs and would return home without them. The standard of living here is the draw so even if you disqualify them for legitimate jobs with E-verify, the US economy is so vast and complex that they'll just find off-book work and recede further into the shadows here rather than go home to live in third-world poverty and hopelessness.

For hardliners like Trump who brag that he'll deport everybody, promising to make them stand in line, it's bull shit. What's he gonna do, build thousands of Mexican orphanages to house all the legal, American-born kids whose illegal parents just got deported? I get that it's red meat to rabid Trump followers to say stuff like that, but it'll never happen. 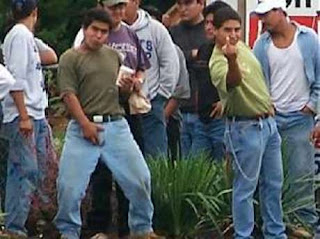 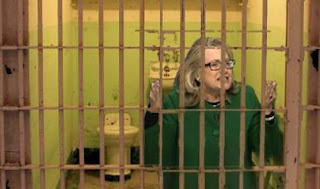 I wonder if plans are quietly being made to get either Michael Bloomberg or Biden/Warren into the race if things take a dark turn for Hillary legally?
I think a Biden/Warren ticket would be more formidable against the republican, than Hillary, for the democrats.
But an indictment or even a criminal investigation of Hillary and her ignominious exit from the race would bring a long-overdue and delightful end to the Clinton hegemony in the democrat party.
Posted by Ed at 7:50 AM 1 comment:

So Norway kicked out about 50 Muslim "refugees" for behaving badly toward their women. So what's a horde of savages to do for shits and giggles? They decided to give the nearby Russian town of Murmansk a look see.

Apparently the "refugees" attacked some Russian women in the pub district one night by violently groping and sexually molesting them.....as we know Muslim men in gangs are wont to do.

Because Russian men, having not succumbed to moonbattery via political correctness, and caring about their culture and women, they gave the Islamic rabble a well-deserved Rodney King beating, hospitalizing 18 of them. Reportedly, even the Russian cops got in a few punches before arresting 33.

And this is why after Europe has died from multiculturalism, liberalism, and white guilt, Russia will still be standing.
Posted by Ed at 9:01 AM 3 comments:

Jeb, "Why is everybody looking at me?"

After the caucuses closed in Iowa last night, MIke Huckabee and Martin O'Malley suspended their campaigns for lack of interest in their candidacies.
Jeb Bush was then wondering why everybody was now looking at him?
Here Jeb indicates his approximate chances of winning the GOP nomination.
That's why everybody's looking at you Jeb 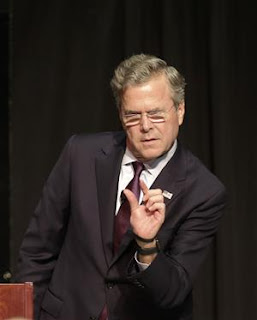 Bus drivers in Sicily don't give out free rides

We've seen over and over how Muslim "refugees" demand that host citizens bend over backwards to give them stuff. For one Muslim immigrant to Italy, this includes demanding a free bus ride around Sicily. When the bus driver told him to buy a ticket like everybody else, the Muslim vagrant reacted by punching the driver......bad move. Watch and enjoy the bus driver's response........ 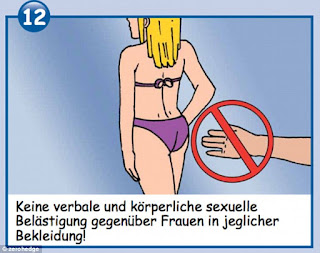 So we've covered the disdain the Islamic world evidently has for dental hygiene, today we'll expose their cultural propensity for sexual assault. As "refugees" from Syria, Somalia, and other Islamic countries, colonize Europe, the rate of sexual assault, rapes, and other forms of assorted, unwanted sexual aggression has gone up concomitantly on the streets in broad daylight and even at public pools.

Bizarrely, the European leaders seem unwilling to judge it as wrong or even speak out against the misogynists, citing cultural equivalence to justify it and host-citizen intolerance as the problem, rather than calling the hostile Muslim invaders what they are, devolved savages.

The Quisling German government is handing out idiotic cartoons that show the Muslim barbarians that groping women at public pools is frowned upon, as if they are unaware of this universal truth.

Rather than the stupid circle with a slash, they should show a hand holding a Ruger against the temple of a Muslim who's got his hand on a German girl's ass. They would better understand that message.

Where are the German men to protect their women? I'd like to think that it is still the case in the US that if Muslims went around in gangs raping and fondling our women, there'd be some Muslim men taking dirt naps.
Posted by Ed at 9:13 PM 4 comments: