I was right about Bill Gates being wrong 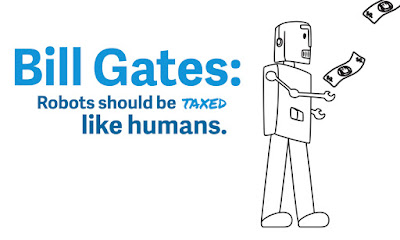 I caught a lot of criticism for saying that Bill Gates doesn't understand basic economics if he believes that robots should be taxed as "workers" because the loss of revenue to the government they represent is bad for the country.

Peter Schiff is a financial broker, analyst, and CEO. He sums up the inanity of Bill Gates perfectly........

"It's amazing how someone this smart can be so dumb! How many people directly lost their jobs due to computers? Robots are just more functi...onal computers. If the government had imposed large taxes on PCs and software its probable that no one would even know who Bill Gates is. All labor saving devices take people's jobs by definition. Does Gates believe all tools and equipment should be taxed, with the goal of making sure all work is done entirely by hand? If so, it's a good thing there was no stone age Bill Gates advising the cavemen." - Peter Schiff
Posted by Ed at 12:10 PM 2 comments:

The illegal alien agenda Trump should have rolled out

Here's what Trump should have done regarding illegal immigration:
Look, nobody is really concerned about the garden-variety illegal immigrant who is working construction, landscaping, whatever and otherwise not being a criminal, we're worried about the violent, drug, gang elements in the illegal population.
The smart thing to appease the base and fulfill his campaign promise would have been to 1) use the full force of the US police machine to round up gang members, drug dealers, and other violent felons known to be in the country and very publicly kick them out. 2) given that there will never be mass roundups, introduce a plan for the rest of them that basically promises non-voting legitimacy if they pay back taxes, register with the INS to become taxpayers, stay out of trouble for the 10 years that they must wait to become a voting citizen, and finally pass the same citizenship test(in English) that all immigrants take.
If Trump had done what I proposed, he would be wildly cheered by his base and the democrats wouldn't have an opposing leg to stand on because they've advocated for the exact same thing.......kick out the violent criminals and create a path to citizenship for the good ones.
But they didn't ask me.
Posted by Ed at 5:59 PM 1 comment:

Protestors should stay on the sidewalk

Heh heh, this ought to give these protestors a moment's pause before blocking traffic over Trump-hate or stupid $15 minimum wage, or whatever they're upset about that day.
A state rep in Tennessee proposed a bill that would give TN drivers civil immunity if they accidentally run over protestors running around in the street.
Disappointingly, the bill doesn't allow you to run them down on purpose, but if the jobless reprobates jump out in front of you and you hit them, tough luck for them.
Below, BLM bums learn a hilarious lesson about the physics of protestors versus cars.

Hahahahaha, Hillary tried to troll president Trump by tweeting "3-0", referring to her delight regarding the decision by the 9th circuit on the travel pause.
Kelley Ann Conway promptly slapped her across the face with this tweet, "PA, WI, MI", the three states Hillary ignored thinking they were hers in the election but which Trump won to take the presidency from her.
Kelley Ann for the win.....Pwned!!!
Posted by Ed at 9:22 PM No comments:

Madonna tries to clean up her karma 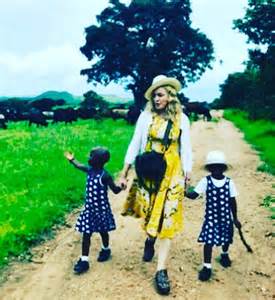 I've always sort of suspected that a lot of celebrity ding-a-lings very publicly adopt kids from Africa or where ever, as a way of making up for misbehavior and at least partly as a career accessory, like a handbag or a nice pair of Christian Louboutin's. It gets them back in the spotlight, which they cannot live without.

So at 58, Madonna, no doubt with camera crew close by, convinced an orphanage in Malawi to sell her two more kids(she already has a couple of adopted kids from Malawi). I understand that she does a lot of charity work with orphanages there, so this isn't really a surprise......so good for her I guess, and good for the kids. I'll give her props for that.


But then it's a no-brainer that even being raised as a fashion accessory by a dopey, self-indulgent, dingbat billionairess in the West is still better than growing up literally anywhere on the dark continent.....so I guess it's a win win.

p.s. the international adoption racket is designed to wring as much money out of rich, childless Americans as possible. A lot of bureaucrats' palms must be greased before they let you take the kid home. Yes I'm a cynic, but that doesn't mean these countries aren't literally selling their kids to us. Still, the kids win and that's all that matters

I wonder if they'll call her grand-ma. Heh heh.

Trump should not politicize the church

At the national prayer breakfast President Trump promised to "get rid of and totally destroy the Johnson Amendment". It is a more-or-less toothless amendment that prohibits non-profits, specifically churches, from engaging in specific political speech, or risk losing tax-exempt status.

When I heard Trump say this, the libertarian hair on my neck stood up. We don't allow doctors or lawyers to sleep with their patients/clients because as professionals they possess undue levels of trust, influence, and it could be argued, authority.


Such is the case with preachers who, as they shepherd the souls of their flock toward heaven, presume to be speaking with the authority of God himself. That process should not be political as preachers may possess undue levels of trust, influence, and authority over their congregations.

More practically, having that kind of influence over that many people potentially, opens up that preacher to outside influence from a fat donor to the missionary fund for instance.

"Tell your megachurch flock to vote for Hillary and your mission trips to Uganda will be fully funded by the Clinton Foundation." You get the picture.

To the point: I am against the allowance of the politicization of churches. And the Johnson Amendment, while archaic and ineffectual, should remain on the books as a symbolic, if nothing else, totem to remind people that not all parts of life are political.
Posted by Ed at 12:42 PM 9 comments: