Once again Islam has contributed to the rich multicultural tapestry that is American life, when Dahir Adan stabbed 11 shoppers at a mall in St. Cloud, Minnesota after screeching about Allah and asking victims if they were Muslim before stabbing them. Thankfully an off-duty cop shot Adan and sent him off to hell, before he could stab anybody else.

We are constantly lectured to by our superiors that Muslims are noble victims of intolerant Americans' oppression and bigotry, rather than soulless miscreants of a barbaric cult. To that end, local authorities and the FBI are persisting in the fantasy that the motive for the attack is still unknown.

Any observer with a functioning rudimentary ganglion knows what the motive was, but it would be impolitic to point it out.

This guy isn't working for Habitat for Humanity, he's about to bash your infidel head in.... 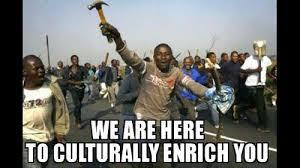 It's bad enough that our feckless government deliberately imports the unassimilable dregs of the Islamic world by the tens of thousands, whose dual purposes are to displace American voters and to impose a drain on the welfare system to the point that the government has no choice but to take more control, but then to appropriate $4.6Million/year for their "emotional wellness" is absurdity at its most preposterous.
The money comes with the promise of job placement, but 99% of similar welfare colonists in Germany stubbornly remain unemployed.
Why work when your host government forces its citizens to pay lavishly for your every need? And idle lives of leisure allow more time to agitate for "rights" and otherwise cause trouble.

These hordes of welfare colonists need emotional reassurance on our dime. 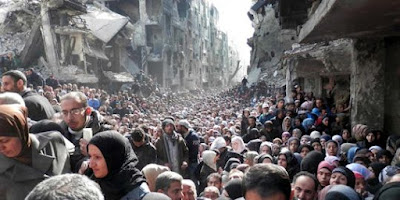 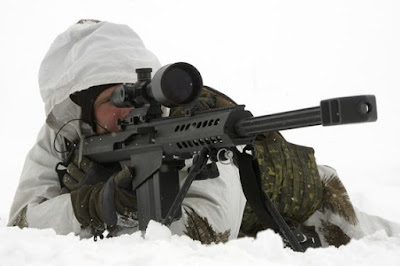 A British Special Air Service sniper has done it again. From a mile away, he hit the fuel tank on the back of an ISIS executioner who was about to slaughter 10 people with a flame thrower. I'm delighted to report that three of his buddies standing near by died in the conflagration as well.
The SAS sniper used the American made Barrett M107 .50 cal.
4 bad guys with one shot......I love it!
Posted by Ed at 10:21 PM No comments:

Kate Upton is not impressed with the Dolphins

Supermodel Kate Upton called the 4 Miami Dolphins players who knelt during the national anthem yesterday, "a disgrace".
I knew there was a reason I liked her, I just could never put my finger on it.......her patriotisms are   spectacular! ﻿
﻿ 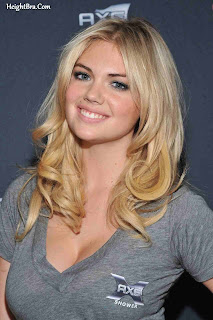 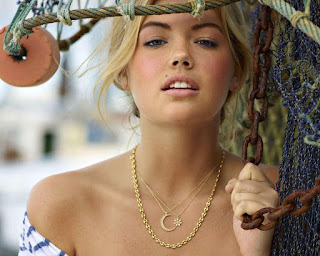 Steve Buscemi is a cool guy

Just in case you needed another reason to be a Steve Buscemi fan.......

"In 1976 Steve Buscemi took the FDNY civil service test when he was just 18 years old. In 1980 Steve Buscemi became a New York City Firefighter. For four years, Buscemi served on one of FDNY’s busiest, Engine Co. 55 in Manhattan’s Little Italy. He later left the fire service to become a successful actor, writer and director. After 9/11/2001… Brother Buscemi returned to FDNY Engine 55. On September 12, 2001 and for several days following Brother Steve worked 12-hour shifts alongside other firefighters digging and sifting through the rubble from the World Trade Center looking for survivors. Very few photographs and no interviews exist because he declined them. He wasn’t there for the publicity." 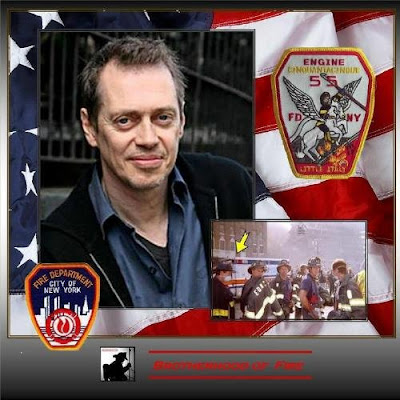 I spent the morning with my friend David cutting wood at his backyard sawmill. This thing is from the 20's when guys would haul the sawmill from place to place, set it up and cut trees for a few houses or barns, then pack it up and go to the next homestead.
It's called a Peckerwood Sawmill for its small scale. I'm impressed that David was able to reassemble something that old, build a shed and stage for it, then make it work.
Posted by Ed at 2:07 PM No comments:

No license plates, no food

Alabama's Holman federal prison is home to most of our death row inmates and the only prison in the state where executions are carried out. In three separate recent incidents, at least two guards and the warden were stabbed by inmates.

Today 45 inmates staged a work stoppage in the kitchen and in the license plate stamping detail. No demands were made and no violence has ensued, yet.

A friend suggested that the prison stage a food stoppage, heh heh, that should learn 'em.
Posted by Ed at 3:55 PM No comments:

Everybody's defending Colin Kaepernick's constitutional "right to free speech" and "freedom of expression". Let me learn you some truth: the Constitution only protects individuals' speech from government interference. Your speech is not protected by the Constitution when you're at work, unless you're a lazy, redundant, overpaid bureaucrat who works for the federal government.

Your private employer may restrict your speech pretty much any way it likes, with a few important exceptions such as the preferential application of restrictions based on race, religion, gender, orientation, etc. Obviously you can't do that.

Kaepernick isn't freely speaking because the Constitution allows him to, he's speaking freely because NFL commish Roger Godell allows him to.

All Godell has to do is make a rule this off-season stating "no political speech while in uniform or while officially representing the NFL or its franchises. What you do on your own time is your own business".

I think that would be a good rule, otherwise we're going to start seeing every disgruntled champion-of-causes making in-game political statements in all sorts of ways and it's going to turn off a lot of fans.

Besides, Kaepernick is only drawing attention to himself, not his cause.

Here's Kaepernick, exercising the coaches right to sit him on the bench. 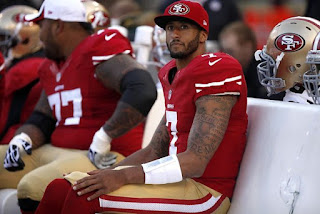 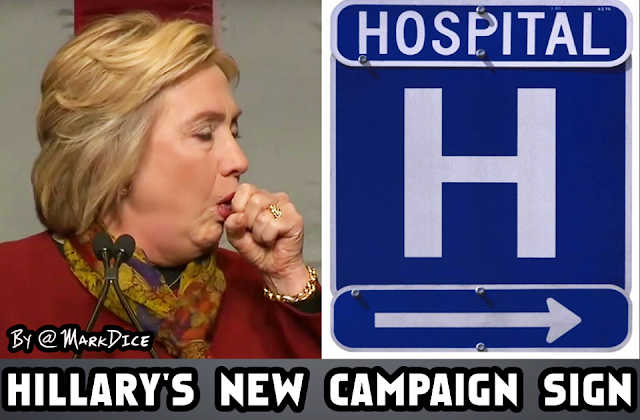 We are in the end-game toward single-payer

Single-payer health care is the holy grail of socialist/liberal agenda items, but the American people wouldn't fall for it. So Obama and the Pelosi shrew rammed through Obamacare as a reasonable facsimile thereof.

And as predicted by anybody with two functioning neurons, the Obamacare sham is crumbling by the minute. Insurers are pulling entirely out of Obamacare marketplaces leaving one and sometimes no providers, premiums are skyrocketing to the point that guess what? Millions of Americans are left with only one choice, which isn't really a choice is it?

It's what the administration blithely refers to as the "Public option". Or in other words, Medicaid.

This was the plan all along, obvious to everybody but the most retarded democrats. Obama and the democrats have wanted single payer for decades so they created Frankenstein's monster, Obamacare, knowing that eventually it would collapse and leave them no choice but to "rescue" uninsured Americans with the Public Option (Medicaid).

This removal of tens of millions of previously insured Americans off private insurance and onto welfare insurance, will ultimately cause the private insurance companies, at least the ones brave enough to remain in the dwindling market, to collapse for lack of customers.....eventually forcing literally everybody onto the public option.....ta da, European-style single payer.

Here is Obama indicating his regard for the American people and their preposterous, antiquated notions of free market capitalism. 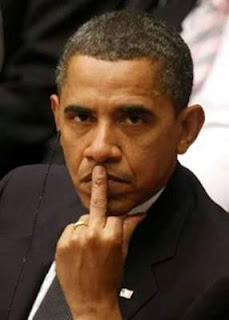 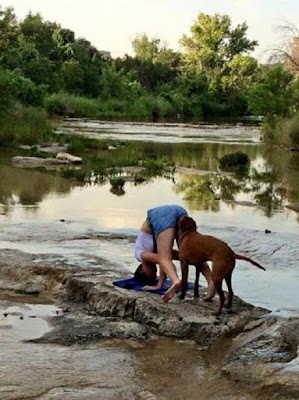 When performing yoga moves outside, it's always a good idea to have a spotter.  ;-)
Posted by Ed at 9:24 AM 2 comments: 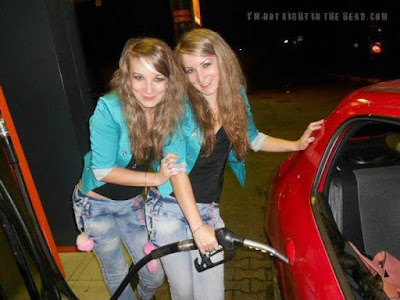 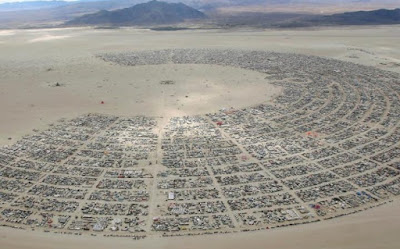 The popular Burning Man festival takes place in Nevada's Black Rock Desert where 70,000 young people, mangy has-been hippies, and drug users from casual to hard-core, gather to listen to music and ponder a utopia, stated as based oddly on "radical self-reliance", in love and harmony through music....blah blah blah...gag me!
Predictably Hollywood has taken notice and many rich celebrities and .com billionaires drop in by helicopter or SUV caravans and pitch air-conditioned tents with full-time chefs, armed security, and DJ's......not exactly the egalitarian experience the purists prefer.


So what's a dirty hippie to do but engage in micro-revolution against the "rich parasites". Hooligans trashed camps of the rich and famous, cut electricity cables, stole their expensive food, and otherwise ruined their trip.
Heh heh, for once I'm siding with the celebrities.
Posted by Ed at 10:37 AM No comments:

When questioned by the FBI, who by the way behaved more as stenographers rather than interrogators when they interviewed Hillary about her 13 missing Blackberries, handling of classified documents, and suspicious disappearance of tens of thousands of e-mails from her illegal basement server, Hillary repeatedly croaked, "I don't remember" or "I don't recall" like 35 times in a single interview. She also claimed that the paragraph designations in virtually all State Dept documentation were alphabetical listings rather than how classified the information therein was.

Among other designations, TS stands for top secret, U stands for unclassified, and C stands for classified...obviously. But Hillary claims to have no memory of the briefing she received regarding the designations, blaming her ignorance of them on a concussion she had during a fall.

Here's Hillary exhibiting the same vacant, glassy-eyed look that Gabby Giffords has had ever since she got shot in the head. Neither should be trusted to drive a golf cart or handle sharp cutlery, much less have access to the nuclear codes. 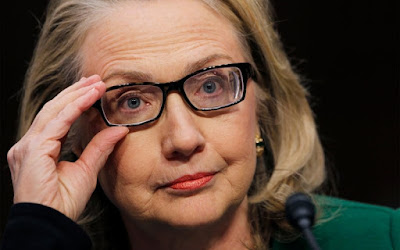