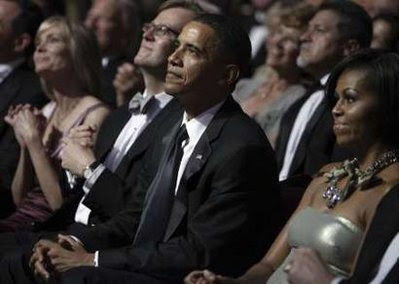 Now that the BP oil leak has been plugged and the spill cleaned up, war between the Korea's has been averted, and Iran has abandoned it's nuclear ambitions, President Obama can finally enjoy a much deserved evening of relaxation and entertainment with his family.....oh, wait!

The Obama's evidently see themselves as king and queen of America. They had their asses kissed by vapid, B-list celebrities for the second time this week at a Ford Theater gathering for Bishop Desmond Tutu(famous America and Jew hater). That The One ignored the anniversary of the D-Day invasion in which several thousand Americans gave their lives to liberate Europe from Hitler's reign of terror, demonstrates his loathing of the military specifically and his dismissal of events that don't include praise of himself, in general.

The Obama's must feel they deserve the sycophantic adoration and deification they get from dumb, Hollywood dingbats. Otherwise how do you explain their constant hosting of lavish parties stocked with worshipful celebrities and other assorted dingle berries, while regular Americans by the hundreds of thousands languish under economic, domestic, and overseas uncertainty and hardship?
Posted by Ed at 11:02 AM

Email ThisBlogThis!Share to TwitterShare to FacebookShare to Pinterest
Labels: Obama