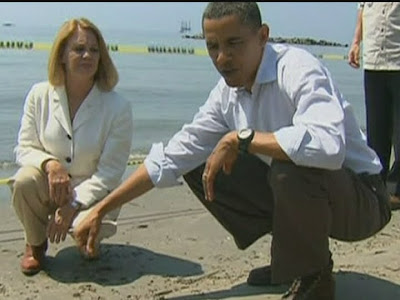 It's been a while since The One added to his long and distinguished list of domestic czars, but he's been told that there's another crisis afoot. So what's a dithering, ineffectual president to do but appoint a commission to think about it and a czar to micro-manage it....

From Agence France-Presse -- President Barack Obama, in his televised speech to the nation Tuesday, will announce the creation of an oil recovery “czar” to oversee progress in siphoning crude from the Gulf of Mexico oil spill, his chief spokesman said.

Speaking on ABC television’s “Good Morning America” program, White House Press Secretary Robert Gibbs said the position is envisioned as “somebody that will be in charge of a recovery plan, putting a recovery plan together…when we get past the cleanup and response phase of this disaster.”

Aren't there enough leaders on the ground in the Gulf already? Thad Allen, Gov. Jindal, etc? Obama should announce on TV tonight, that anybody with a skimmer or siphon barge can come to the Gulf and skim and siphon as much crude oil as they like and any money they make by selling it, they can keep. If he had done that on day 3, I'll be none of the oil would have reached the beaches and estuaries. Enterprising boat captains would have taken care of the spill and BP would have been more motivated to cap the well faster. Instead, Obama spent two critical weeks thinking about it, and then didn't act. Now it's too late.

Outsourcing the management of the crisis to a czar only makes Obama look weak and indecisive....which he is. Worse, it exposes his administration as the craven, political opportunists they are. Clearly, all the thinking they were doing as oil polluted Gulf beaches, was how to capitalize on the spill politically.
Posted by Ed at 12:46 PM