Afghanistan to join the rest of the modern world? 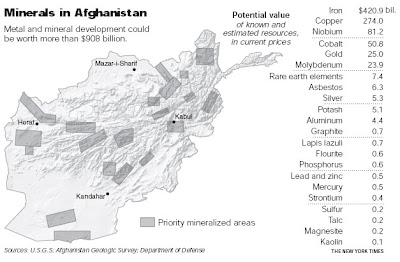 This is the price of practicing backwards, Islamic fundamentalism and basing your economy on supplying heroin to the world's addicts.....

From NYTimes -- WASHINGTON — The United States has discovered nearly $1 trillion in untapped mineral deposits in Afghanistan, far beyond any previously known reserves and enough to fundamentally alter the Afghan economy and perhaps the Afghan war itself, according to senior American government officials.

The previously unknown deposits — including huge veins of iron, copper, cobalt, gold and critical industrial metals like lithium — are so big and include so many minerals that are essential to modern industry that Afghanistan could eventually be transformed into one of the most important mining centers in the world, the United States officials believe.

An internal Pentagon memo, for example, states that Afghanistan could become the “Saudi Arabia of lithium,” a key raw material in the manufacture of batteries for laptops and BlackBerrys.

In exchange for killing every last, dirty, Taliban, terrorist pig in Afghanistan, the U.S. should take whatever minerals we like in an amount that equals the cost of our effort there. These primitive, third-world nomads haven't a clue how to wash their dirty night shirts much less how to mine lithium and copper from the Earth. All they know how to do is herd goats, manufacture heroin, and kill each other. If we end up turning Afghanistan in to the mining capital of the world, then maybe I could agree with our being there.
Posted by Ed at 8:35 AM