The dumbing down of America 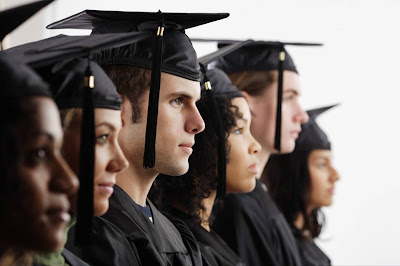 Want to know why our country is in rapid decline? This might be a good place to start.....

In top suburban schools across the country, the valedictorian, a beloved tradition, is rapidly losing its singular meaning as administrators dispense the title to every straight-A student rather than try to choose the best among them.

Principals say that recognizing multiple valedictorians reduces pressure and competition among students, and is a more equitable way to honor achievement, particularly when No. 1 and No. 5 may be separated by only the smallest fraction of a grade from sophomore science.

"...reduces pressure and competition among students".....to a liberal in academia, this is a bad thing.

Liberalism insidiously dictates that anybody who stands out as superior in a crowd of mediocrity must be leveled and forced to be no better than everybody else. If everybody gets to be valedictorian, why try to make good grades at all? If no score is kept in the game, why try to score?

It's crap thinking like this that is making the U.S. a crap nation with lazy crap citizens for whom losing isn't motivation to do better next time but, cause to whine like babies and demand fairness of outcomes be guaranteed.
Posted by Ed at 11:14 AM

Email ThisBlogThis!Share to TwitterShare to FacebookShare to Pinterest
Labels: education