What's a zealot to do? 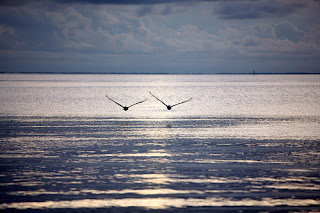 Here is a picture of the Gulf Coast, which thanks to global warming, may not be threatened by Katrina-like hurricanes again. This is bad news for crazed environmentalists who rely on weather-caused death and destruction to advance their harebrained theories on the evils of man's existence on Earth.

The study, to be published on Wednesday in Geophysical Research Letters, found that climate model simulations show a "robust increase" in wind shear in the tropical Atlantic during the 21st century from global warming.

Wind shear, a difference in wind speed or direction at different altitudes, tends to tear apart tropical cyclones, preventing nascent ones from growing and already-formed hurricanes from becoming the monster storms that cause the most damage.

Email ThisBlogThis!Share to TwitterShare to FacebookShare to Pinterest
Labels: environment

Mike McConnel, a global warming expert, was on the radio today. His comments (paraphrased) are as follows:

The temperature of the earth rose 1 degree over the entire 20th century. Most of that increase came in the first half of the century, before cars, CO2 emmissions, etc. He noted that while Mr. Gore has brought a vast amount of attention to this issue, it is needless and that the earth is continuing its normal cyclical warming and cooling. He also pointed out that with all the mining, oil exploration, and natural gas wells being tapped that the earth is probably more stable than ever before.

Wonder what AlGore will say now?