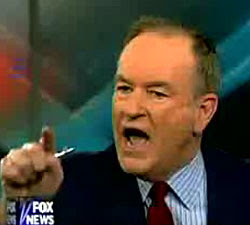 Everybody's weighing in on the near fisticuffs between Jerry Rivers aka "Geraldo Rivera", and Bill O'Reilly on the impact of illegal immigration.

They were discussing the sad case of two girls who were killed when an illegal alien got drunk and hit them with his car. Geraldo maintained that it was just another tragic, drunk-driving case and had nothing to do with the guy being illegal.

Technically, Jerry has a point. To the families of the two victims, they probably don't care that the guy was illegal. Geraldo's point was that any person, legal or not, could have gotten drunk and killed those girls.

I tend to agree more with O'Reilly. This alien should never have been in the country in the first place. But for the incompetent DA and judges who refused to jail and/or deport this guy when he comitted previous crimes, he would not have been drunk on the road that night. Sure, we all assume a certain level of risk just by living our lives. At any time, somebody might do us harm, but, the level of risk goes up unnecessarily when you have 10-20 million unpunished lawbreakers running around the country.

If my wife or kid got hurt by an illegal alien, his criminal status would exascerbate my anger. That the immigration laws were ignored by sympathetic, political prosecutors and/or judges when this person should have been deported, would infuriate me.
Posted by Ed at 1:41 PM

Email ThisBlogThis!Share to TwitterShare to FacebookShare to Pinterest
Labels: immigration

Has Geraldo found Al Capones safe yet? He lost all journalistic crediblity with that stunt. All he does is pick people to fight with in an attempt to stay popular and self-justify his job. Too bad the moronic masses seem to willing to endure his schtick. I was hoping he would get trapped into the sex slave trade program while searching for Natalie Holloway.

If so the the newest addition to the porn patrol "Darryl Hannah" will find her. The former "Dancing at the Blue Iguanna" starlet is on a kick to eliminate the sex slave trade from the planet. She has a report from Cambodia showing Charles Manson's twin brother engaging in this business. I felt much safer knowing that she was on location. I did get this eerie feeling that she was really trying to fiure out how to cash in on this oppotunity and do some good to revive her career. I guess though as a good global citizen, we should just sit back and allow 12 year old girls to be sexually brutalized and forced into a life of prostitution for pennies a day, instead of the good ole USA stiicking it to em as need be. Just ask Paula.

So, by your reasoning joe, Bush should invade Argentina on the hunch that some young girls might be having sex for money? Hell, go to any middle school in America and you can find 12 year olds having sex. The point is unless it directly affects the US, we shouldn't be prying in the business of other countries. And before you attack me for condoning forced child-prostitution, I'm saying that we can apply pressure using other means to achieve desired ends in countries, other than attacking them.

But I know how men like you think, the USA is the lone arbiter of right and wrong in the world and can dish out punishment when we want to. You couldn't be more wrong-headed.

Ed, with this post you are showing yourself to be the anti-hispanic homer I always thought you were. Geraldo is right, it's not an illegal immigrant issue, it's a drunk driving issue. If a black guy kills somebody while drunk, do you also blame his race for the crime? You and Bill O'Reilly personify the "ugly American" other countries resent about us.