The jig is up Al 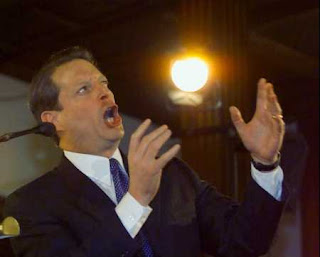 You'll be shocked, shocked I say, to learn that The Goreacle has been scamming the world's idiots by selling them worthless "carbon offsets"...

Companies and individuals rushing to go green have been spending millions on “carbon credit” projects that yield few if any environmental benefits.

A Financial Times investigation has uncovered widespread failings in the new markets for greenhouse gases, suggesting some organisations are paying for emissions reductions that do not take place.

The burgeoning regulated market for carbon credits is expected to more than double in size to about $68.2bn by 2010.
The FT investigation found:

■ Widespread instances of people and organisations buying worthless credits that do not yield any reductions in carbon emissions.

■ Industrial companies profiting from doing very little – or from gaining carbon credits on the basis of efficiency gains from which they have already benefited substantially.

■ Brokers providing services of questionable or no value.

■ A shortage of verification, making it difficult for buyers to assess the true value of carbon credits.

You'll be just as shocked to learn that Al Gore profits from every aspect of the carbon-credit scam. The scheme is to swindle rich, stupid liberals by convincing them that they can pollute as much as they want as long as they buy forgiveness from Al's carbon credit companies. It is said, "A fool and his money are soon parted". Well, I guess that pretty much describes any dumb liberal who believes Al Gore and his cult of environmentalism, and nothing is funnier than watching dumb liberals getting screwed by one of their own.

Hat tip to Financial Times
Posted by Ed at 12:17 PM