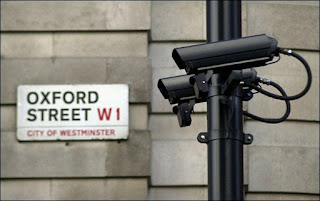 It's bad enough that sweaty, government voyers snoop and peer into the private lives of law abiding citizens in the UK. Now they can berate you for littering, jaywalking, or even girl-watching...

Talking" closed-circuit television (CCTV) cameras which allow operators to shout at people behaving badly are to be installed across England, the government announced Wednesday.

The scheme lets local council workers in a control centre monitor pictures from the cameras and talk to them if they feel they are doing something wrong.

The cameras were piloted in Middlesbrough, north-east England, where they have been used to reprimand vandals and litter bugs, but now loudspeakers are being fitted to cameras in another 20 areas.

If Great Britain's surveillance society isn't a sign of the nanny-State times we live in, I don't know what is.

A slice of birthday cake to anybody who can name the artist from whom I stole the lyric in the title of this post.
Posted by Ed at 1:24 PM

C'mon Reid, you're a former DJ. You should get this easily.

My guess is Rockwell, but I'm not sure that is right. Another 80's flashback. Thanks Ed!