You can't make this stuff up folks. It is actually happening in our country...

On April 11, a white student placed a ham steak in a bag on a lunch table where Somali students were eating. Muslims consider pork unclean and offensive.

The school incident is being treated seriously as "a hate incident," Levesque said. Lewiston police are investigating, and the Center for the Prevention of Hate Violence is working with the school to create a response plan.

Placing ham where Muslim students were eating was "an awful thing," said Stephen Wessler, executive director of the Center for Prevention of Hate Violence. "It's extraordinarily hurtful and degrading" to Muslims, whose religion prohibits them from being around ham. It's important to respond swiftly, Wessler said.

There is so much stupidity in this story to ridicule, I don't know where to start.

How do you commit a hate-crime with a ham sandwich? Why did the story specify "a white student"? Would the paper have specified "a black student" if the kid had been black? I doubt it. According to the liberal template, only whites are capable of hate-crimes.

As an important, respected member of the alernative media, I have obtained an advance draft of the Ham Sandwich-Free Zone legislation currently before the Lewiston City Council:

(a) Any person who possesses a ham sandwich in a place that the person
knows, or reasonably should know, is a school zone, unless it is with the written
permission of the school district superintendent, shall be punished

(b) Punishment shall NOT apply to the possession of a ham sandwich
under any of the following circumstances:
(1) Within a place of residence, business, or on private
property, if it is not part of the school grounds and the possession of the
ham sandwich is otherwise lawful.
(2) The ham sandwich is a mufaletta, panini, or other breaded lunch meat
capable of being concealed on the person and is in a locked container
or within the locked trunk of a motor vehicle.
This section shall not prohibit or limit the otherwise lawful
transportation of any other sandwich, including tuna, PB&J, chicken salad
or other pork meat sandwich capable of being concealed on the person, in
accordance with state law.
(c)Any person who violates subdivision (b) by possessing a
ham sandwich within a distance of 1,000 feet from the grounds of a public
or private school providing instruction to Muslims or sissified liberals shall be punished 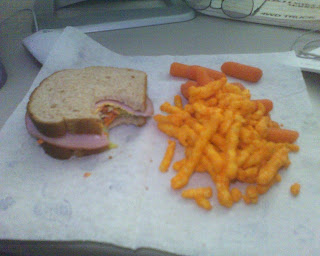 Here is the police mugshot of the ham sandwich suspected of complicity in a hate crime against Muslim children.
Posted by Ed at 1:36 PM

I find the photo offensive. Any mixing of carrots and cheese curls will not be toerated. We must keep these seperate or violence will erupt. By the way, I had my laptop at my dentist's office. He suggests that the bite marks illustrated appear to be from a a pearson of small stature since the bite circumference is small. This might mean that the offended Muslim actually bit the meat and now must purify himself by destroying a US government building and killing many innocent people.

By the way, that sure looks like bologna to me.

Salient observations JC. I too suspected bologna, although it is pork derived also, and as such, would qualify as a weapon of hate.

No green in this diet. All eaters will become malnurished and a blight on society.