Fear and loathing in France 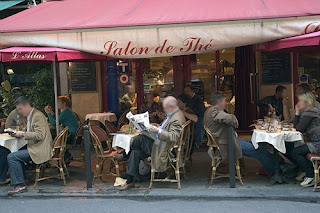 This tidbit of news probably explains a lot...

According to an opinion poll published Friday, the French dislike themselves even more than Americans dislike them, Reuters reported.

The survey of six nations, carried out for the International Herald Tribune daily and France 24 TV station, said 44 percent of French people thought badly of themselves against 38 percent of U.S. respondents who had a negative view of the French.

We should expect little else from a nation of people who willingly participate in their own cultural destruction. Muslims have been agressively colonizing France for decades, yet the French look the other way and pretend that political correctness will get the Muslims to be nice and like them. They are only feeding the alligator in hopes that he will eat them last. How little must the French think of themselves that they won't even breed to save their country? How dark must their outlook be that they won't even fight for themselves against foreign invaders?

Then again, somebody might make the same assessment of the U.S. We barely breed enough to replace ourselves and we certainly won't fight to preserve our culture, borders, or language. How far behind France are we? A couple of decades I'd say.
Posted by Ed at 11:10 AM

The French may hate themselves, but that's no excuse for ugly Americans going over there and expecting everybody to speak English.

There's something called critical thought, Ed. Self-criticism is an essensial part of this and is useful once in a while.

Undeniably true martin, but at what point does self-critique cross the line into self-loathing?

Do you seriously think the French are just trying to improve themselves by self-analysis? I say no.

What's wrong with the collective French psyche is the citizens remember when France was a serious player on the world stage. Now they see France literally dying...at it's own hand. France will probably be Europe's first Islamic country. The population refuses to even breed enough to replace itself. The scourge of socialism has reduced the once proud French nation into a lazy, welfare, nanny-State.

Tell me what the average Frenchman has to be proud of. Name one source of national pride to be found in France? Half of France has given up and has their hand out for government support, and the other half who remain productive, are taxed by the State in order to support the shiftless, loafing class, and they are giving up...after all, why work on behalf of others who refuse to produce and contribute?

That's why the French have a less than nationalistic self-assessment...not because they are just being self-critical.

As usual you twist things, Ed. First of all it doesn't say 'hate', and surveys like these... well, you know where to shove them.

But France is - unfortunately - in serious trouble, no doubt about that. They have made some really unwise ('stupid' in your vocabulary) decisions in the past, and have painted themselves into a very, very tight corner. And the way out is gonna be extremely painful.

What I don't understand is your populistic, light-weight, semi-racist, half-xenofobic vulgar selfsatisfaction. You're an intelligent, educated person - why always so primitive?

Like your 'tell me what the average Frenchman has to be proud of'. While back you questioned if the Middle-East had ever contributed something to the world at all. You're a grown man, Ed - act like one.

Speaking about France and acting like imbecils: Remember the re-naming of french fries...

PS: Ever been to France?

Been there. Dirty filthy place. (Outside of the Louvre and a few other sites that are quite nice and culturally interesting). They are snotty people that hate money-spending American tourists. I have never understood the total disdain for the USA from the French. We bailed them out in WW2. We have always supported their exports and have generously allowed them to remain a voice in world affairs long after they truly were in political chaos. Doing business there is far more difficult than should be. They rely on our generosity far more than they care to admit. As good world stewards, we keep turning the other cheek and going the extra mile for them. I hope some sanity comes to the country, before the Islamofasts start tearing down places of actual interest or start drinking the wine and the real %#&$ hits the fan. Work ethic in France makes the USA look like the industrial nation we are supposed to be.

martin, neither I nor the article I referenced mentioned anything about "hate". I'm not sure to what you refer.

I won't try to address the litany in paragraph 3 of your message except the "primitive" remark. May I assume that by "primitive" you mean neanderthal and unsophisticated? Maybe I just tend to see things in blacks, whites, and absolutes rather than in hues and relativism. You seem to imbue complexity and nuance into every dynamic when sometimes they are very simple and straightforward...even at the nation level. France is literally commiting cultural suicide by anyone's measure and recognizing that doesn't make me xenophobic, racist, or primitive. Remember I foretold America's tending down the same path.

If that isn't self-critique I don't know what is.

As for French pride, tell me what France has done lately on the world stage to instill itself with national pride.

Allow me: Caving to it's Muslim invaders, cutting secret deals with Saddam Hussein for years against the U.N., robbing the U.N. blind in the oil-for-food scandal, failing to repopulate itself, always siding with the terrorists againt the U.S. and Israel, leading the EU down the path of cultural suicide, crippling it's own economy with dreadful socialist economic policy, I could go on.

It's no wonder the average Frenchman isn't enthusiastic about his countrys outlook. I'm not castigating France for anything I wouldn't have the same reaction to of the U.S. was doing the same.

bob's comment about the work ethic is exactly what I'm talking about. When you create a hand-out society like France today(and New Orleans a year ago), the pride in community and self that comes with hard work and self-reliance is lost and forgotten. France has mandatory government paid weeks-long holidays and a 35 hour work week. When somebody else is taking care of you, and you produce nothing, what do you have to be proud of? Nothing is yours.

The fundamental cause of trouble in the world today is that the stupid are cocksure while the intelligent are full of doubt.
- Bertrand Russell

My mistake about 'hate' - got it from the first comment (billb). I apologize.

Are you saying that I'm stupid and cocksure, or intelligent and doubtful?

Sometimes things are what they are. Sometimes situations are exactly what they appear to be. Not everything is relative and open to interpretation. Recognizing that doesn't make me "cocksure". It just makes me a realist. The relativism you seem to embrace is a way for liberals to rationalize away bad behavior, so they can avoid judgement.

Liberals refuse to judge the bad behavior of others because they don't want anybody judging their bad behavior.

The French are behaving badly and have been for decades. Can you seriously dispute that?