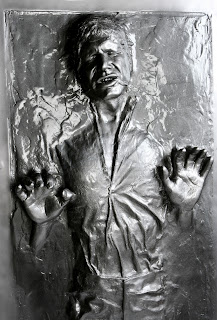 Hahaha....the free market at work ladies and gentlemen. Despite Rush's apology to democrat plant Sandra Fluke for calling her a slut and prostitute for wanting her birth control covered by Georgetown's insurance carrier, a long-time sponsor of Rush's show, Carbonite, pulled it's support from the show. Within 24 hours, investors in Carbonite pulled their support of it and the stock dove 12% and continues to fall today. Heh heh.

Among the reasons for investors abandoning Carbonite is the failure of Obama and the media to get the vapors when MS-NBC turd-breath Ed Shultz called Laura Ingraham a "right wing slut". Obama didn't call Laura the way he did Ms. Fluke, to see if she was OK and no sponsors of MS-NBC announced they were withdrawing their association.

Carbonite CEO David Friend said that he hopes this would contribute to a more civilized public discourse, but where was his concern when Ed Shultz said what he did?

I love when the free market punishes somebody for being reactive and stupid.....heh heh.

Bonus: what does this picture have to do with the post?
Posted by Ed at 10:26 AM

Hans Solo. Got frozen in Carbonite.

Now would be a good opportunity for other companies like Mozy to ally with Rush and push the 'we agree with free speech' to take up the clients deserting Carbonite.

What a bunch of doofuses (doofi?).

And yes, I'll bet there are companies lining up to sponsor Rush since his fans are loyal to the point of investing in, not just patronizing, his sponsors.

Hey I am so glad I found your blog, I really found you by accident,
while I was looking on Yahoo for something else, Anyways I am here now and would just like to say thanks for
a remarkable post and a all round interesting blog (I also love
the theme/design), I don’t have time to look over
it all at the moment but I have saved it and also included your RSS
feeds, so when I have time I will be back to read a lot more, Please do keep up the superb
jo.
Take a look at my homepage ; lanautica

This article offers clear idea in favor of the new visitors of blogging, that truly how to do
running a blog.
Take a look at my homepage : if i were a rich man

Hey! I know this is kinda off topic but I'd figured I'd ask.

Would you be interested in trading links or maybe guest writing a blog article or vice-versa?

My site addresses a lot of the same subjects as yours and I think
we could greatly benefit from each other. If you might
be interested feel free to shoot me an email. I look forward
to hearing from you! Awesome blog by the way!
Visit my web site : free chat no registration

I am sure this paragraph has touched all the internet viewers,
its really really fastidious paragraph on building up new website.
Also see my page - Poker

Oh my goodness! Amazing article dude! Thank you, However I
am having difficulties with your RSS. I don't understand the reason why I cannot join it. Is there anybody getting the same RSS issues? Anyone who knows the answer can you kindly respond? Thanks!!

Howdy! Would you mind if I share your blog with my zynga group?

There's a lot of people that I think would really enjoy your content. Please let me know. Many thanks

<======Redneck, neo-con, not-a-single-unique-thought-process, wannabe intelligent humans trying desparately to fit in with the rich crowd... Pathetic that you couldn"t follow someone who was intelligent rather than a recovering addict. Shame you will be the first asking for handouts when you turn 62.